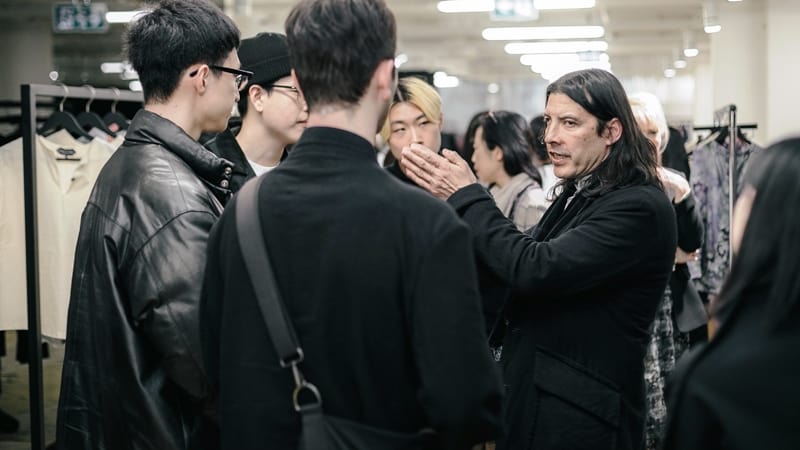 Avant-garde fashion designer Geoffrey B. Small visited Vancouver this past weekend to introduce his first book and commemorate his 100th collection which was recently presented in Paris. This was the first speaking event to take place in the Leisure Center’s lower level “Seminar Room.”

The extremely exclusive art and design book entitled “100” was photographed by legendary Japanese fashion editor and photographer Toru Kitahara of Geoffrey B. Small’s 100th Paris collection with a super limited print run of only 100 copies printed and handbound in Italy. Each book was hand-signed and numbered by the designer and presented with an extensive selection from the new clothing collection for Spring/Summer 2018 also entitled “100.”

Kitahara shot the collection on the same day just before the historic Paris show took place uniquely capturing the beauty, emotion and elegance of both the models and the collection in a photo essay that represents a master artwork which will truly stand the test of time.

Geoffrey B. Small is an American designer living and working in Italy. He started his career in 1979 by being named a winner in the largest student design competition in North America and making clothes for friends on an old Singer sewing machine in the attic of his parent’s house outside of Boston, Massachusetts. A pioneer in avant-garde handmade clothing for both men and women, since 1993 he has shown more fashion collections in Paris than any other North American designer.

Recently, he presented his 100th collection in Paris and his firm, based in Italy at Cavarzere Venezia, is recognized as the world leader in hyper-quality handmade sustainable design and ethical clothing creation and has heavily influenced the entire industry in recent years on the issues of sustainability and ethical production in fashion.

If you haven’t been to Leisure Center, a visit is long overdue. The store is an amazing new retail concept space designed by world-class architects Casper Mueller Kneer (CMK) and directed by owners Mason Wu and Muyun Li. The industrial-themed 20,000-square-foot space was created in a 1930’s heritage building in the city’s centre and has been showcasing obscure designers and presenting non-traditional fashion, art and music events such as Laurence & Chico’s trunk show and NYC’s Pharmakon with Yang Li.

The “100” book launch exemplifies Wu and Li’s mission to bring to our creativity starved city, the world’s finest, most forward-thinking styles and ideas, and continues to set a high standard for future events hosted at Leisure Center.