EcoLux☆Lifestyle: MONOVA Joins Polygon Gallery and The Shipyards in 2021

The recent developments of the Polygon Gallery and The Shipyards complex in North Vancouver have resulted in a very welcome significant cultural growth in the area. For those living downtown the two locations prove to be an irresistible lure for an afternoon or weekend outing. Soon another draw will be unveiled. In early 2021, the Museum of North Vancouver (MONOVA) will be open!

This 16,000-square-foot facility will be located at 115 West Esplanade, right in the middle of the growing Lower Lonsdale district. The unveiling will also see the showcasing of a community fundraising campaign called Bringing Stories to Life as a part of their $1.5 million fundraising mission.

“2020 has been a challenging year for many of us,” remarks Director Wesley Wenhardt. “With this project, we’re excited to be offering some much needed good news. Now more than ever, museums are where communities discover themselves and grow strong and resilient.”

Some of the museum’s most anticipated exhibits will include the Streetcar 153 and the Sch’ich’iyuy (Two Sisters) cedar carving. Streetcar 153 (or BC Electric Streetcar 153 as it is known by train buffs) was a long-serving part of the North Vancouver Streetcar network and has been refurbished to showcase the rich transportation history of the city. It was used for over 40 years on the North Shore before being retired in 1946 and being used for various purposes around the Lower Mainland. The streetcar will be showcased prominently in the lobby of MONOVA when it is completed.

Another centrepiece is the Sch’ich’iyuy carving, a masterful work by acclaimed Sḵwx̱wú7mesh (Squamish) carver Wade Baker. This welcome carving will also greet visitors to the museum while reflecting on the rich Indigenous identity and history of the area.

“The red cedar Sch’ich’iyuy panel is based on the ancient Sḵwx̱wú7mesh Sister’s Mountain Transformer legend,” notes Baker. “The twins were raised from childhood to be leaders for their people. They asked their father, the Siyam, the Chief, to bring peace to the warring tribes along the coast. He could not refuse their request and fires were lit along the coast to signal a great welcoming feast to bring peace. For their efforts, the twins were immortalized in the mountain peaks you see today that watch over us.” 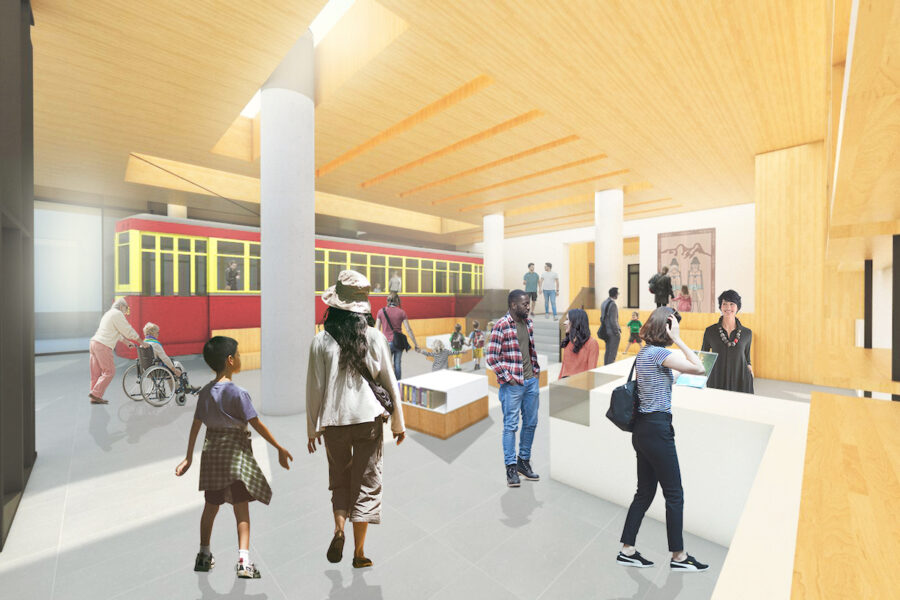 Baker’s retelling of this timeless Sḵwx̱wú7mesh story refers to what many Vancouverites know as The Lions, the twin peaks that look over the city from the North Shore Mountains. His exhibit will prove to be a timeless ode to the cultural significance of the mountains.

The goal of the MONOVA project is to transform the way that the community experiences North Vancouver’s stories by showcasing the landscape, people, and history of the North Shore as a method of contemplating how the city will continue to evolve in the future.

This project is set to become another cultural centrepiece in the fast-growing Lower Lonsdale region of North Vancouver – and is a worthy attraction for museum-goers visiting Metro Vancouver’s many attractions.