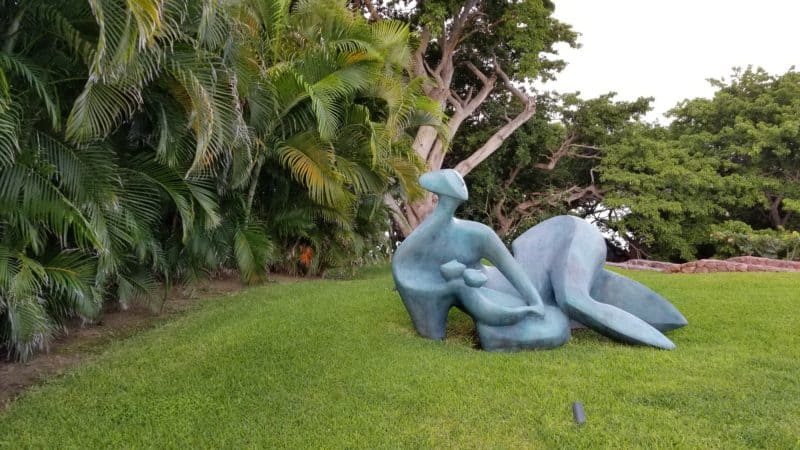 Having always been a city girl through and through, making the decision to get-away to a luxury resort on the ocean, was a difficult one. For years most of my travel has been to cosmopolitan havens of cool. Destinations have always been for business with small windows of opportunity to quickly visit either the must-see tourist areas or venture into underground arthouse experiences. 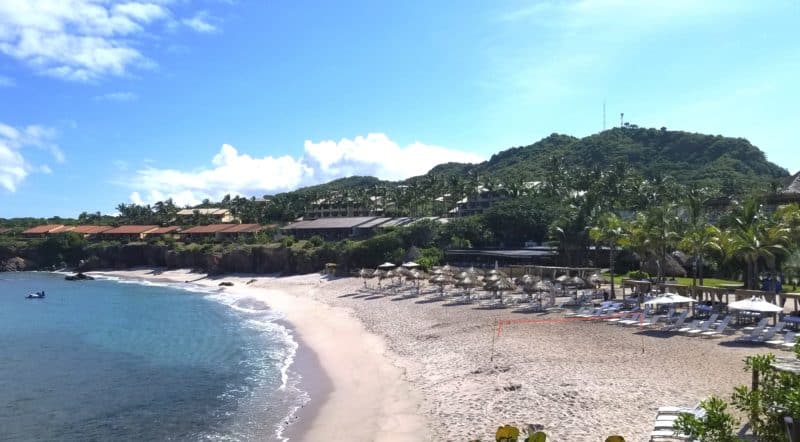 This year, I left all the travels decision-making up to my partner and watched rather aloofly from across the room as he obsessively researched possible resort locations for a get-away. The only restriction was that there would be no more than a six-hours spent in the air. 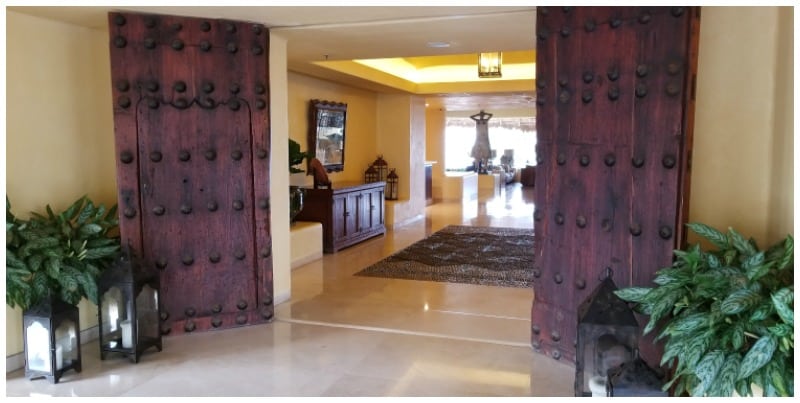 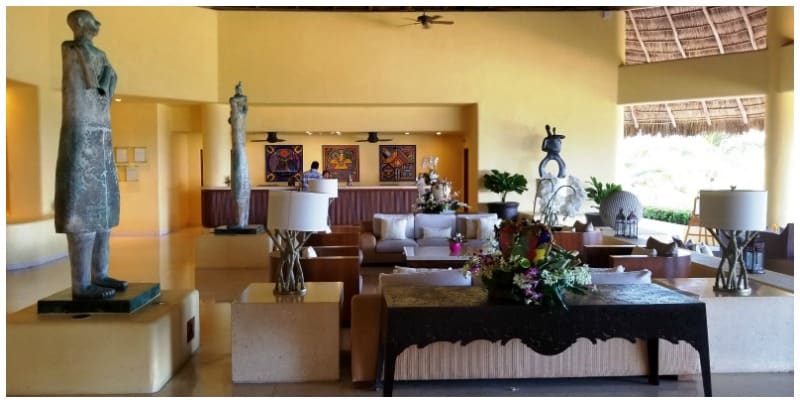 Four Seasons Punta Mita is a gated resort within a 400-acres of a nature reserve on a private peninsula overlooking Bahia de Banderas. Blanketed with lush greenery nestled beside the white sands of the Riviera Nayarit’s coast in the heart of Mexico. We arrived before the high season began and was greeted with a quietness punctuated only with splashing surf, bird calls, and the occasional whirring of the groundskeepers’ electric carts.

To Spend the Day in Paradise

Each day we eschewed the recommendations of the in-room guide and wandered about exploring along the meticulously maintained paved paths. For amenities, this pet-friendly resort boasts 10 tennis courts, two oceanside golf courses, a fitness centre, multiple areas of beach cabanas, an adults-only pool complex, a lazy river with a frozen treat bar, and a stunning infinity-edge pool. Staff attentiveness was incredible and unobtrusive. We were regularly offered frozen flavoured treats, hydrating fruit drinks, and stations with 3-levels of sunscreen (up to 50+ spf), mini-libraries, and towels were tucked all around. 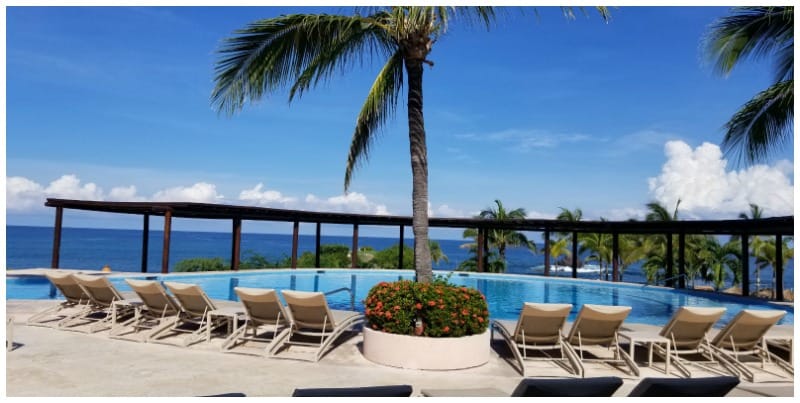 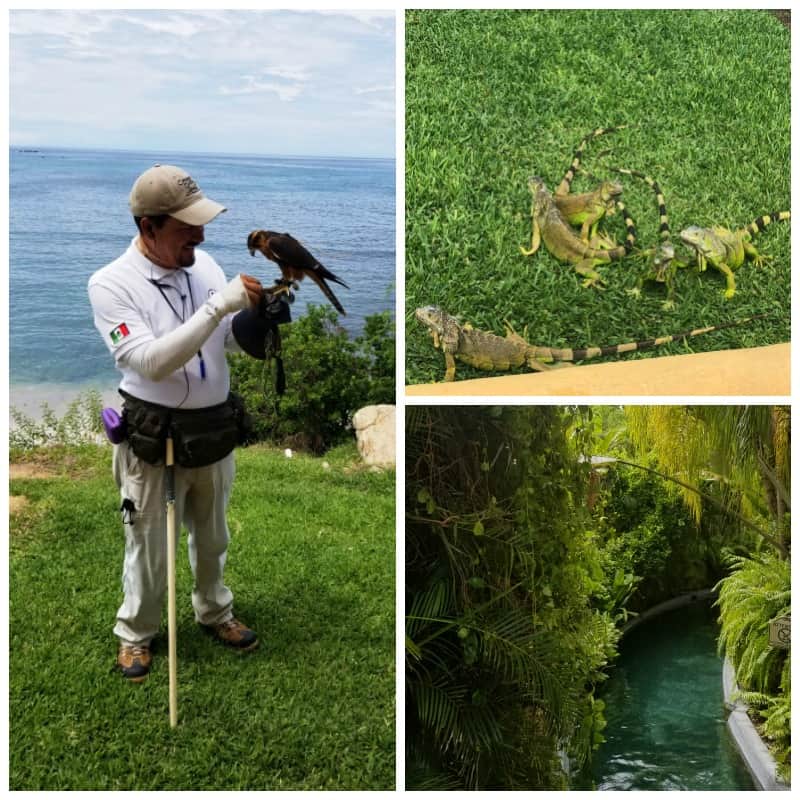 At the largest pool, a dream-inspired infinity, afternoons were spent watching the falconer and his charge keep the area clear of gulls and rodents, and lazily tossing chopped apples to a slaughter of iguanas which were delivered to the pool’s edge by an underwater attendant!

To Feast Upon the Divine

Our appetites were sated daily at the Aramara Restaurant which offered a selection of plantbased meals and the wonderful Chef Esther Sanchez who relished the challenge of veganizing entrees as we requested. 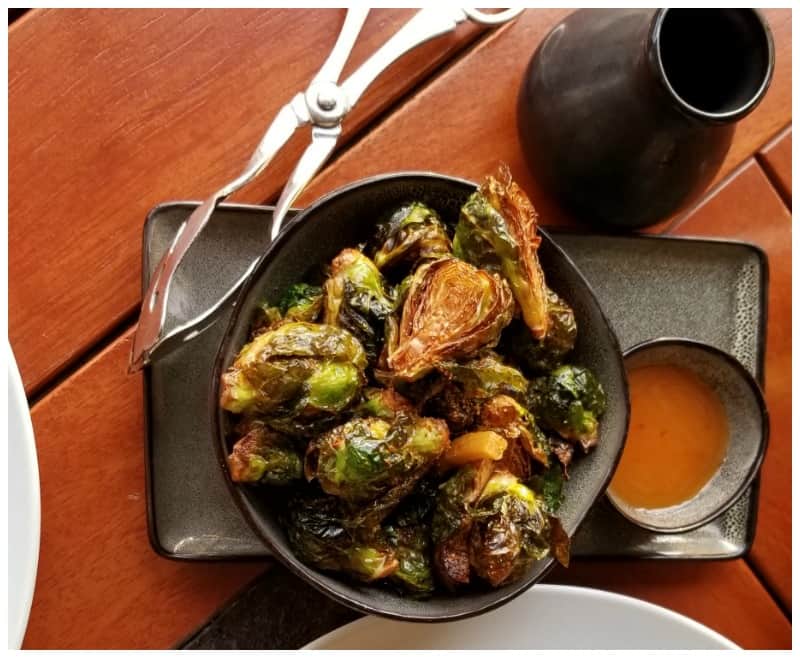 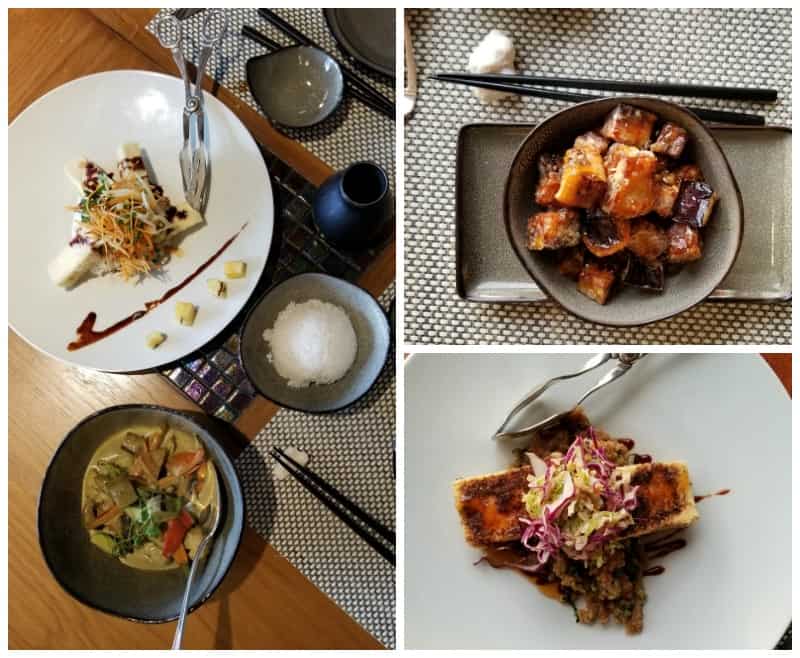 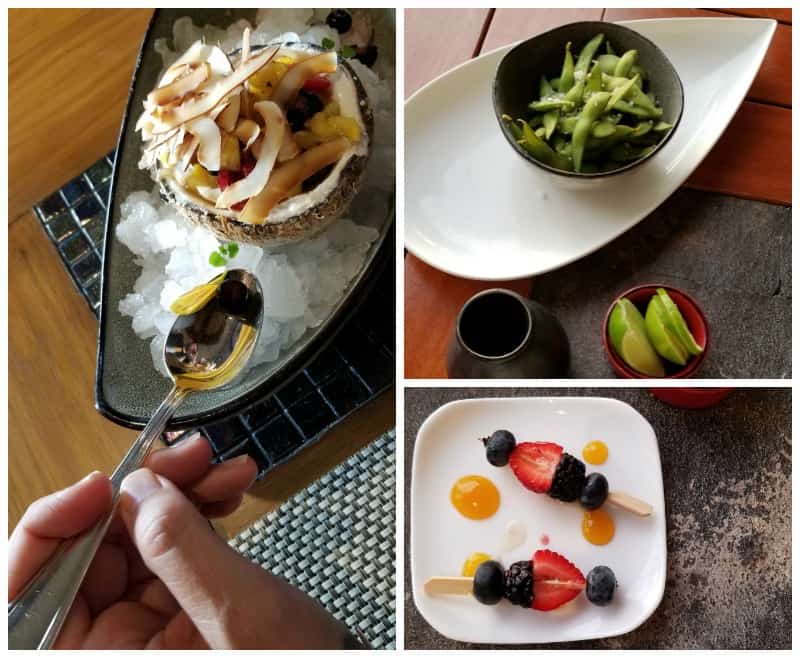 Aramara served up a breakfast buffet that spanned two rooms with traditional Western breakfast items with most grain-based items, such as pancakes, muffins, and cereals also available in gluten-free. Mexican items were miniature versions of the dishes we love plus nopales and exotic syrups. 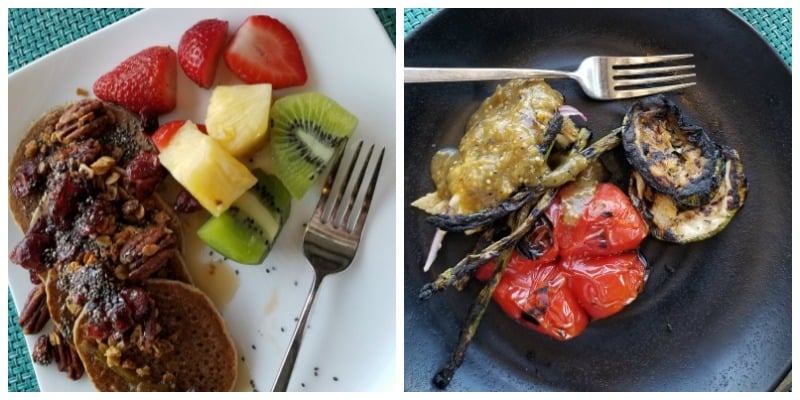 The Luxury of Our Lodgings

Hidden in the Midst of a Jungle

The resort grounds were a maze of pathways that twisted and revealed sculptures, birds, and one evening a Mexican fox. On the occasion that we ventured too far away and the humidity threatened to melt us down, a request of any passing staff member would have an electric car arriving within minutes to escort us back to an air-conditioned respite. 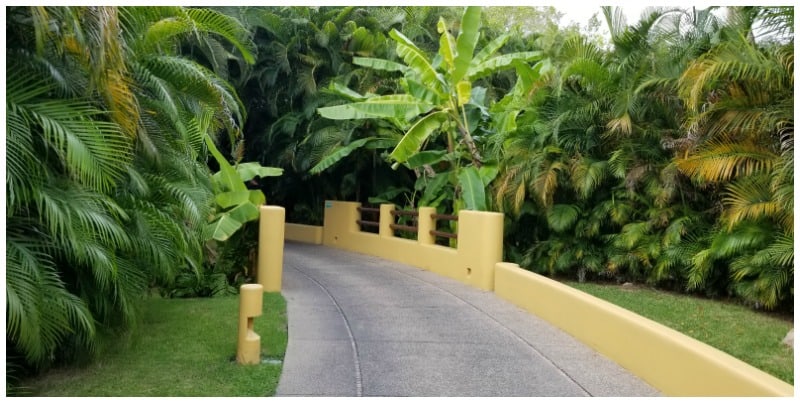 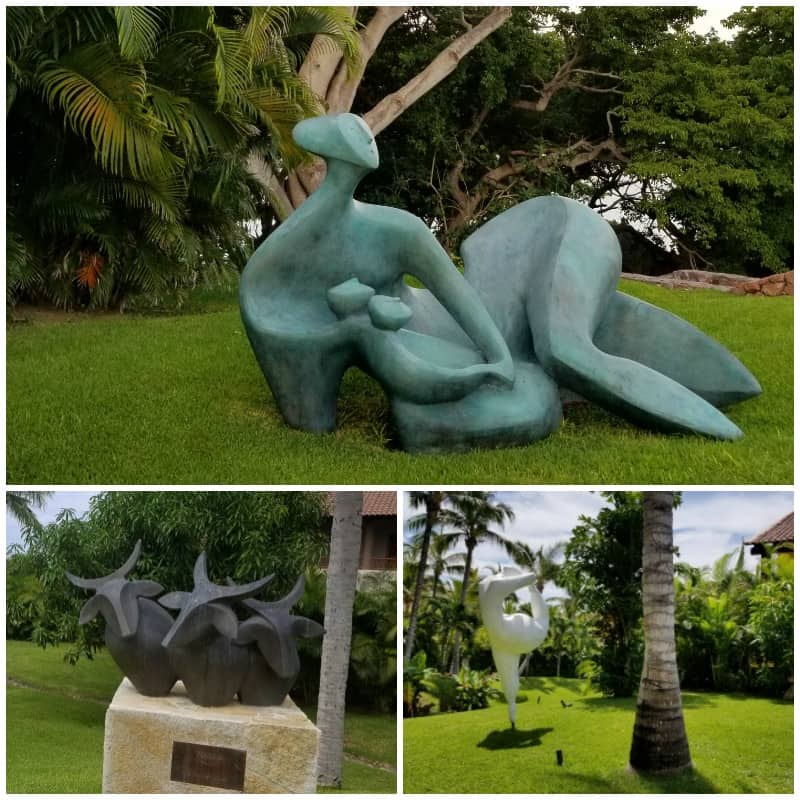 Giving Back to the Waters

Guests at the Four Seasons Punta Mita had a nightly ritual that revolved around the release of sea turtles. We came across a procession on our first night and were spellbound by the determination of the children as they carefully and gently carried their containers to the beach. As they encouraged the struggling hatchlings to the surf, the sun set in soft purples and pastels. 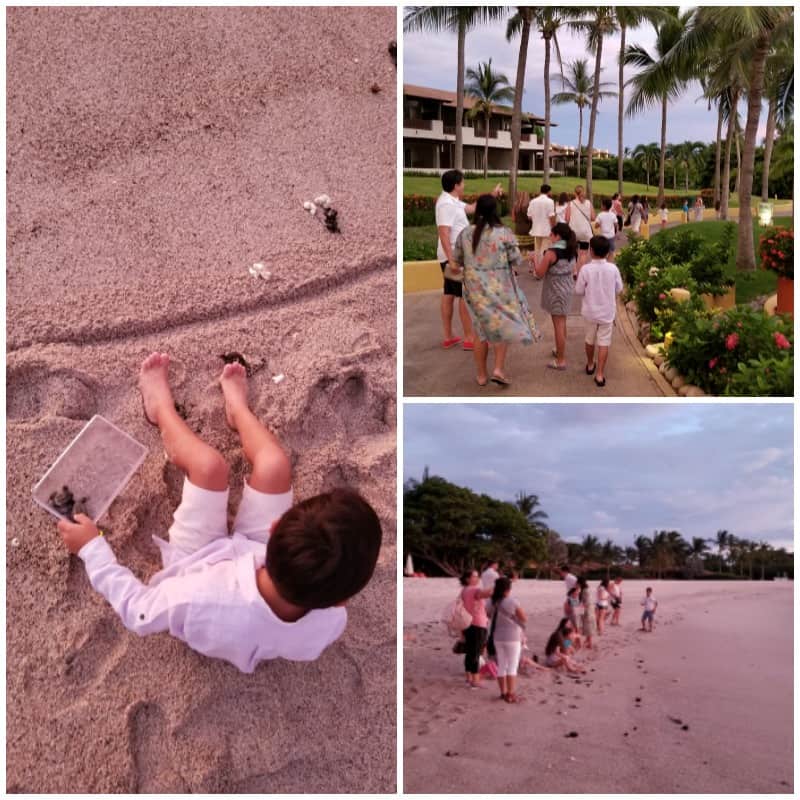 On our final morning, we made our way lazily down to the beach for one last view of the crashing waves and reminisced on how we had been taken in by white beaches, a couple of good books, frothy drinks, and the amazing cuisine. As we lay in the cabana awaiting our driver to head to the airport, we realized that we had not hit the greens, rode the surf, snorkeled, or even visited any of the beach-side bars for night-time fun. What we had done was successfully unplugged and enjoyed just being – an incredibly hard thing to do – and were very happy. 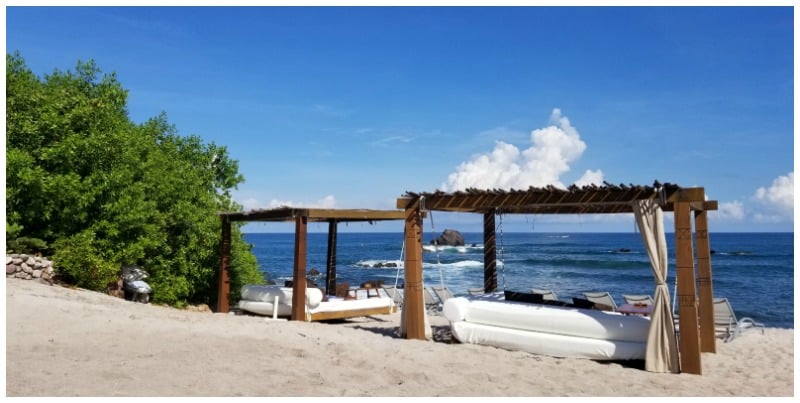